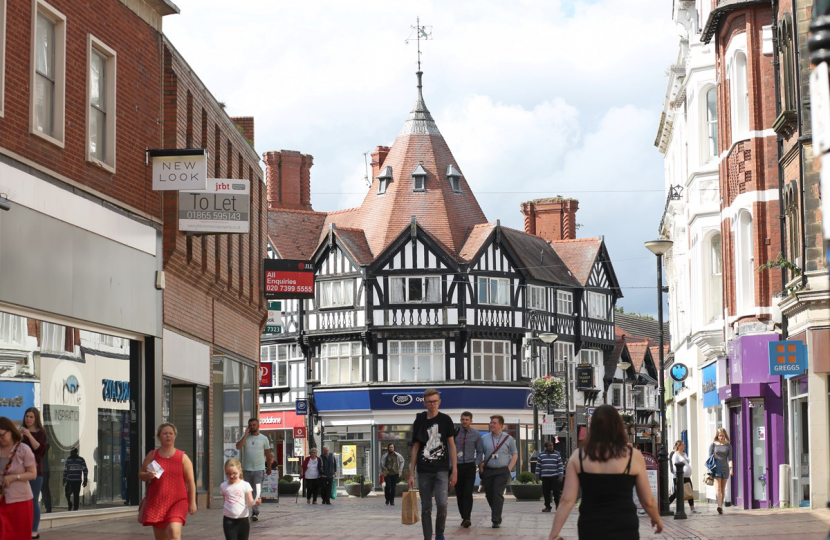 Jeremy Corbyn? He'll have us all wearing grey and eating cabbage soup, says DAN HODGES as he visits the old mining town where contempt for Labour's leader is challenging deep-rooted loyalties

Samantha despises the Conservative Party. 'I hate the Tories,' the local tea-shop worker tells me.

So how will she be voting next Thursday, I ask. 'I'll be voting Tory,' she replies.

This is Wrexham, one of the pillars of Labour's vaunted Northern Red Wall. A Labour seat for the past 84 years, it was held by Ian Lucas in 2017 by 1,800 votes. But he's stepping down at this Election. And the wall is starting to crack. 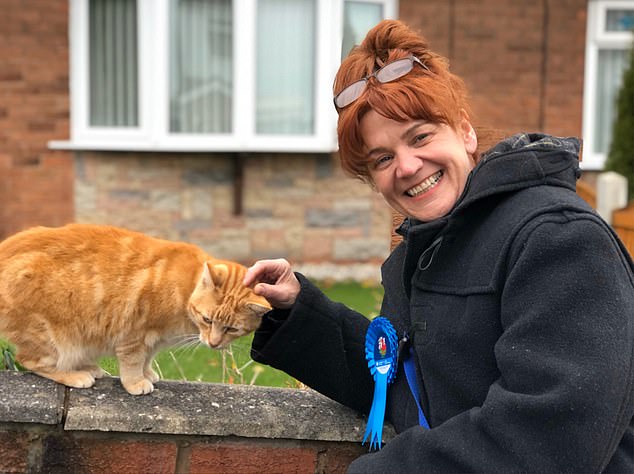 The woman charged with turning heads of potential Boris supporters in Wrexham is Sarah Atherton (pictured on the campaign trail), a busy, plain-speaking nurse

I'm standing by a row of terraced houses on Vernon Street, outside the offices of Labour candidate Mary Wimbury, a local social care worker. She's out canvassing.

'I'm really sorry,' says her agent, 'but it's the last week, and we're putting all our efforts into meeting the voters.'

Across the road, at the Rhosddu Laundrette, I see why. Joan (she asked me to use a pseudonym) points to a faded picture of a group of women queuing for their morning washing.

'That's what my mum looked like,' she tells me.

'She'd always go out with her hair tied, and she'd have a dress like that for best.'

What will Joan be doing next week, I ask. 'It's hard,' she admits. 'I don't like Jeremy Corbyn, and I really like Boris.

'But this is a working-class area. The thought of me voting Tory would make my parents and grandparents turn.'

The woman charged with turning the heads of Joan and other potential Boris supporters is Sarah Atherton, a busy, plain-speaking nurse.

We first meet in the Miners' Welfare Institute, an incredible Grade II-listed Edwardian Baroque building built with miners' subscriptions in the former pit village of Llay. 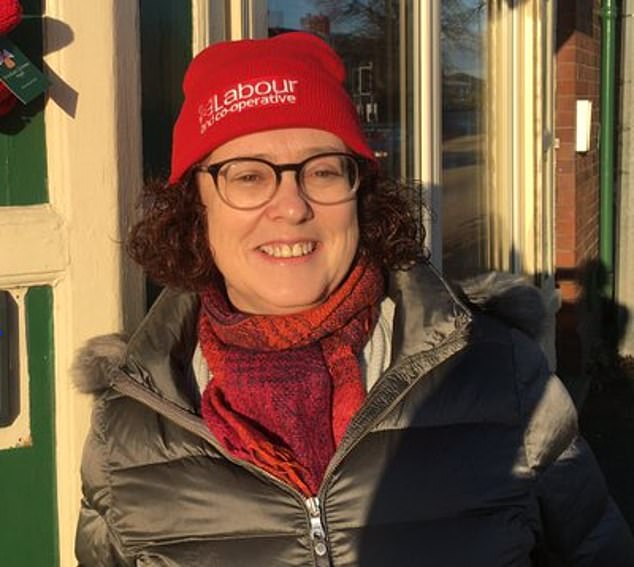 Mary Wimbury (pictured), who is also a local social care worker, is the Labour candidate up for election in the area

Atherton begins by telling me a story from when she started her nursing training. 'I was treating this man who had blue marks all up his arms. I said, "What happened?" and he told me he'd been at Gresford [a local mining disaster in 1934 in which 266 men died]. It was coal dust embedded in his skin.'

She motions round the room. 'Did you ever think you'd meet a Tory candidate in a miner's social?'

I ask her what issues are arising on those Labour doorsteps.

'And that's not necessarily Brexit. Marx was mentioned this morning. Someone said, "He'll have us all wearing grey and eating cabbage soup," which gave me a good laugh.' I note the very formal reference, 'Mr Corbyn'.

Is that an edict from Tory HQ? 'No. It's what we call him at home.'

After Atherton leaves, I get talking to Rod, a former jet-washer who became a van driver after picking up an industrial injury.

He voted for Ian Lucas, who helped his family get upstairs heating – 'blimey, getting out of that bath in winter…' But he won't be voting for Mary Wimbury.

'When I had my injury, it was actually good for me that I had to work to get back on my feet. With modern Labour, I think they want to hand everything to you.'

Walking into the town centre, I see Wrexham has been transformed into a Christmas tableau, replete with performers in historic Victorian garb. But the festive cheer seems forced.

As you work your way up Queen Street, the tinsel-draped stalls can no longer hide the rows of empty shop fronts and a cluster of To Let signs.

If the surrounding villages were decimated by the closure of the mines, it seems central Wrexham is slowly being eaten away by the inexorable, internet-fuelled decline of the high street.

A situation that should be ripe for exploitation by a party that hasn't been in power for a decade. But in the General Election of 2019, political gravity no longer asserts itself.

I'd started forming the impression Labour's Red Wall could be crumbling. Then I walk into The Turf pub, just next door to the iconic Racecourse football ground. And the wall completely collapses.

Richey, a painter and decorator, is sitting at the bar in his paint-spattered work clothes, surrounded by pictures of past glories.

He went to his first Wrexham game at the age of nine, when his dad carried him through the crowds, and placed him on a milk-crate so he could get a decent view. He's shared his team's trials and tribulations – mostly tribulations – ever since.

'Let's pull the skin off the onion,' he tells me. 'If we don't leave the EU, people round here are going to rise up [Wrexham voted 60-40 to leave in the referendum]. Boris will get Brexit done, and Corbyn won't.'

Across from him is Mark, a security guard. He's monogrammed with tattoos on his arms, knuckles and even his ear lobe.

He's always voted Labour, and waited patiently to shake Tony Blair's hand when he visited Wrexham in the late 1990s.

'My dad was a miner. Phew… the thought of his son voting Tory… Labour's ingrained in people here. But that's what I'm doing. And everyone else is too.' Why? 'Corbyn,' comes the reply.

Over the past month I've travelled across the country, and picked up things that could give Mary Wimbury and her fellow Labour candidates cause for hope. In Bolsover, I noted disillusionment among a significant number of Brexiteers.

In Canterbury, it was the strength of support for Labour among students. In St Ives, the anaemic nature of Jo Swinson's campaign. But north, south, east or west, one theme has dominated my conversations with the voters to the exclusion of all others. Or one man. Jeremy Corbyn.

This is not the Brexit Election, it's the Jeremy Corbyn Election. A few weeks ago I noted Boris had yet to 'seal the deal'. But Jeremy Corbyn is sealing the deal. He's sealing it for the Conservative Party.

Tory strategists have spent months grappling with the dilemma of whether to frame Labour's leader as a dangerous extremist, or dithering incompetent. They needn't have bothered.

In the eyes of the majority of those I've spoken to, he's both. I've never witnessed such antipathy towards an opposition politician. The IRA. The antisemitism. National security. His Brexit vacillation. The Queen. The settled narrative before this campaign was none of these 'stuck' in 2017. Well, they have in 2019.

In turn, Corbyn has stuck – like a limpet mine – to his party. And with four days to go, we are nearing the point of detonation.

I finally manage to catch up with Mary Wimbury in a Costa, just off the dark and increasingly deserted high street.

She's a bundle of adrenaline and is trying to remain upbeat. 'I think it's going to the wire,' she says. 'There are still a lot of undecideds, and people are understandably fed up with politics over the way it's been over the past few years.'

A committed Remainer, she believes in the party's second referendum stance, but is admirably clear about how she would vote. 'I would still back Remain,' she says, 'and when I talk to people, most of them understand that. Most recognise we need a way out of this.'

BUT there's no way out from the issue crippling her campaign. 'It's certainly raised, let's put it like that,' she acknowledges with a smile.

'My answer is, "Here in Wrexham, it's my name on the ballot paper." I'm promising to be a strong local MP, standing up to whoever I need to. I'll stand up for whatever I believe in Westminster, whether that's to Boris Johnson or Jeremy Corbyn, and for my traditional Labour values.'

With that, she disappears into the night, trying to locate a few more voters to shore up Labour's crumbling Northern Red Wall. But time has almost run out. For her, for her leader and for her party.