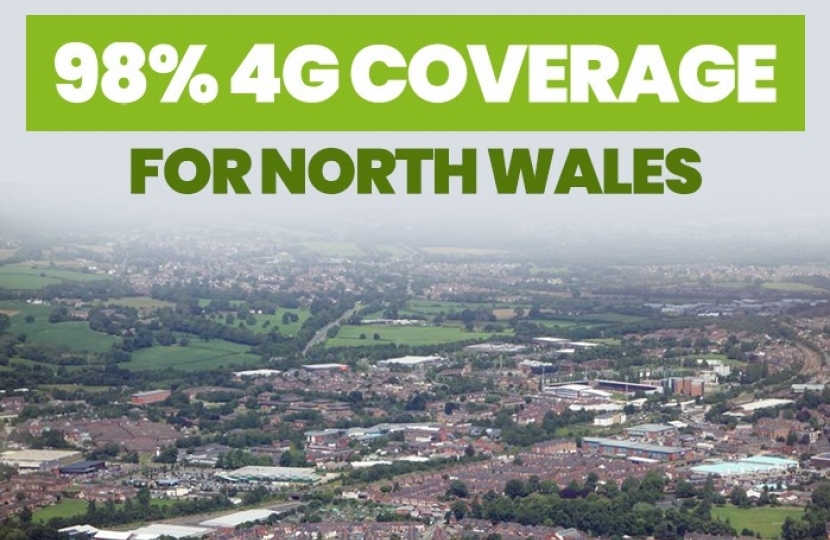 Wrexham residents are set to benefit from a digital infrastructure revolution with huge upticks in high-speed mobile and broadband coverage as part of the UK government’s plans to level up all parts of the union.

Figures published today reveal that every electoral region in Wales will see 4G coverage reach at least 95 per cent under the Shared Rural Network (SRN) - a world-first £1 billion programme between the UK government and mobile network operators (MNOs). In North Wales, 4G coverage will reach at least 98 per cent.

The 4G boost comes as the UK Government today announces that 234,400 rural Welsh properties stuck with slow broadband speeds will be in scope for gigabit upgrades under the government’s £5 billion Project Gigabit scheme.

The SRN will see EE, O2, Three and Vodafone build and upgrade phone masts to end so-called ‘partial not-spots’: areas where only some, but not all, mobile network operators (MNOs) provide 4G coverage. These not spots mean local people cannot connect unless they are signed up with a specific provider who has a mast in the area.

The scheme will bring economic and social benefits for people in the country’s rural communities. Uplifts in 4G coverage will help power new economic growth and allow people to stay connected, shop online, stream entertainment and work on the go.

“We are levelling up the digital playing field with huge boosts in connectivity in every part of Wales, no matter how rural or isolated.

“Thanks to today’s plans people in Wales can look forward to sweeping coverage of fast and reliable 4G when out and about, and a next-generation gigabit broadband connection when at home or at the office.”

“We are delivering on our promise to improve Wales’s digital infrastructure which is so important in achieving prosperity for our communities.

“It is vital that all areas of Wales have the connectivity they need to flourish and these plans will ensure that 95% of every part of Wales will soon have 4G coverage.

“As we build back better from the pandemic, the UK Government will continue to support growth, jobs and innovation across all parts of Wales and the UK.”

The broadband projects, which will be funded through the UK Government’s £5 billion Project Gigabit, will prioritise areas which currently have slow connections and which would otherwise have been left behind in broadband companies’ rollout plans.

The UK government will set out the timetable for the delivery of these connections once it has agreed the procurement process with the Welsh Government.

In a further boost to connectivity in Wales, the Welsh Government has confirmed it can continue to match fund vouchers offered by the UK government’s Gigabit Broadband Voucher Scheme - meaning rural homes can claim £3,000 and small to medium-sized businesses can claim £7,000 towards the build costs of a gigabit-capable network.

The Commonwealth, G7 and NATO Summits