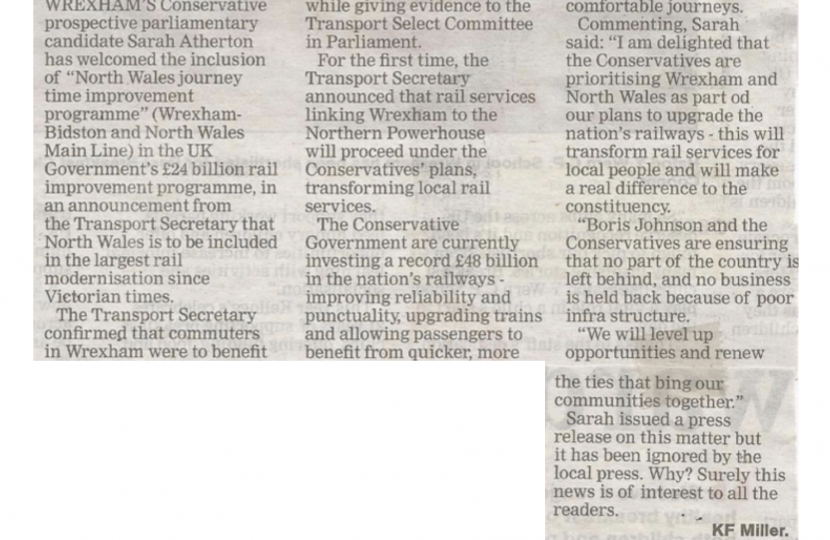 Wrexham's Conservative prospective parliamentary candidate Sarah Atherton has welcomed the inclusion of "North Wales journey time improvement programme" (Wrexham-Bidston and North Wales Main Line) in the UK Government's £24 billion rail improvement programme, in an announcement from the Transport Secretary that North Wales is to be included in the largest rail modernisation since Victorian times.

The Transport Secretary confirmed that commuters in Wrexham were to benefit while giving evidence to the Transport Select Committee in Parliament.

For the first time, the Transport Secretary announced that rail services linking Wrexham to the Northern Powerhouse will proceed under the Conservatives' plans, transforming local rail services.

The Conservative Government are currently investing a record £48 billion in the nation's railways - improving reliability and punctuality, upgrading trains and allowing passengers to benefit from quicker, more comfortable counties.

"I am delighted that the Conservatives are prioritising Wrexham and North Wales as part of our plans to upgrade the nation's railways - this will transform rail services for local people and will male a real difference to the constituency.

Boris Johnson and the Conservatives are ensuring that no part of the country is left behind, and no business is held back because of poor infrastructure. We will level up opportunities and renew the ties that bring our communities together."

Sarah issued a press realise on this udder but it had been ignored by the local press. Why? Surely this news is of interest to all the readers.